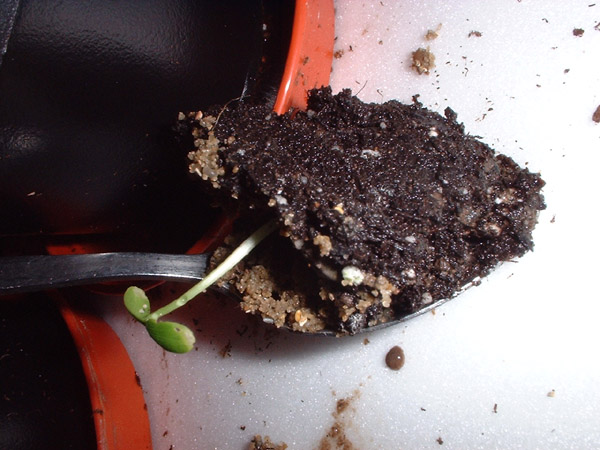 Always work on the principle of changing the variables as quickly as possible. If in doubt push the seedlings & expose them to heat, light & wind from an oscillating fan as soon as possible. Over summer particularly, if a seedling droops DON’T PANIC!…but reseal the bag over it & move it out of direct sunlight until it recovers. Note that some seedlings such as P. membranacea need to have very high humidity when tiny or the leaves will crumple and so are best not rushed.

This may sound a little ‘New Age’ but at this stage or even earlier it is a good idea to stroke your seedling 10 times a day – fingers are ok but a clean wooden dowel e.g. a chopstick would be ideal. Research with 2½” tomato plants shows that the mild trauma of stroking causes seedlings to secrete more ethylene & thus grow less & become more sturdy & woody – which reduces chances of damping off problems. For the more delicate seedlings just blow on them.

Damping off is caused by a number of fungus infections which all seedlings are prone to. It can occur before germination – which will rot the seed, or after, which will usually result in the seedling being damaged & toppling at soil level or the roots will rot. The presence of fungus gnats is a warning sign. They will rise from the soil if the pot is tapped & are slower moving than most insects & easily caught. Damping off problems are best avoided by progressing the seedling as soon as possible using sterile soil, clean equipment, sharp sand & good air circulation. Always watering from below is also vital. Remove the propagator lid as soon as possible & always use a fan in the room to improve air circulation, which will also improve sturdiness. Never leave the soil too wet. Some seedlings are also vulnerable to mildew even with good air circulation…treat with one litre bottle of water with squirt of fairy liquid (detergent) + half teaspoon of sodium bicarbonate.

To help prevent or aid recovery from fungal attack (a classic sign other than sudden death is sudden foliage wilt from the bottom upwards) include organic Neem Oil Systemic Insect Spray & surfactants which will destroy fungus without cell walls. Naiad is a proprietary surfactant available in USA, but I have had considerable success with Fairy Liquid (detergent) – adding a few drops to 500ml dilute Neem solution & a pinch of fertilizer. This should be applied to the soil rather than as a spray.

Also don’t forget that shock can also occur when putting plants outside in pots or planting in the ground. Take them in & out for a few days before leaving them outside &  protect them with fleece to avoid leaf drop which will put them back months. Leave a week or more to make sure they are still growing before  putting into the ground with as minimal root disruption as possible. The best time to put them out is when the 5-7 day forecast is for cloudy weather. Full sun is just too much for many newly emerged Passiflora which usually start in low light conditions on the forest floor.