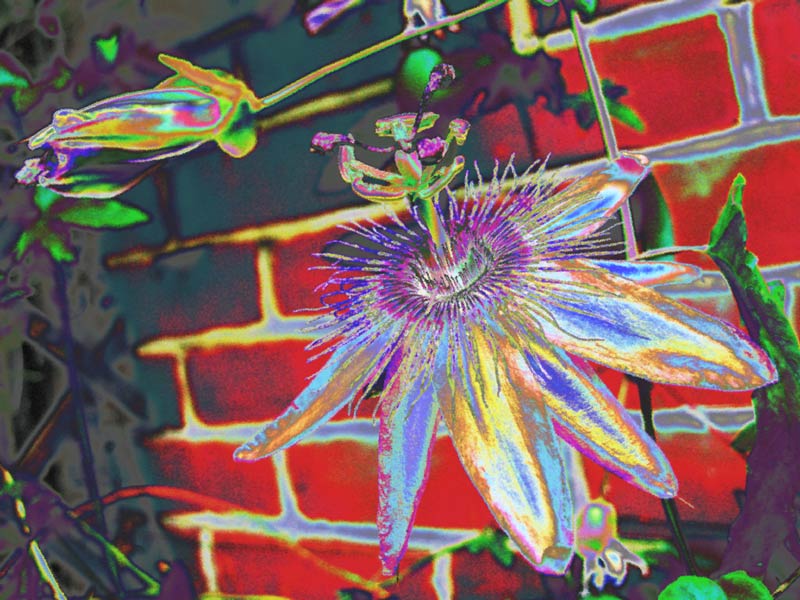 Please do not ever use Passiflora to get high. They are relatively safe as they contain only very modest amounts of toxic substances, and any cyanide released when the foliage is damaged is broken down by boiling. However these toxic substances include MAO (monoamine oxidase) inhibiting beta-carboline alkaloids such as harmaline and harmine, which, if concentrated enough by extraction, can cause unpredictable, severe or fatal interactions both with prescription drugs and some foods and drinks. Gracie and Zarkov, psychedelic voyagers in the 1980’s, comment, ‘The dangerous interaction usually precipitates a hypertensive crisis and certain people are especially sensitive to the effects, particularly those with heart abnormalities or high blood pressure. We ourselves have had a few close calls while investigating the beta-carbolines.’

and related alkaloids are serotonin antagonists, hallucinogens, CNS stimulants, and short term MAO inhibitors.  It is also possible that they and other substances present in Passiflora interact with benzodiazepine (Valium) receptors. The evidence suggests that these alkaloids probably have little pharmacological significance for humans in the plants as is – the levels are too low. That said there are so many Passiflora species that no work has been done on that we simply don’t know what is in them, some could be very potent. If concentrated however, small doses of substances such as harmaline (25-50mg) act as mild and therapeutic cerebral stimulant, sometimes producing drowsy or dreamy state for 1-2 hours. Larger doses up to 750mg may have hallucinogenic effects, the intensity of which varies widely with the individual. Harmaline is also one of the active ingredients of ‘ayahuasca’, a hallucinatory Indian drink of some notoriety.

Dried leaves smoked have been reported as giving a mild marijuana type high. Further Gracie and Zarkov (1985) extracted a concentrate from Passiflora incarnata, which contained 0.05 – 0.1% beta carboline alkaloids, compared with two other plants which contained from 2.0 – 4.0%. They comment:-

‘The high is not particularly psychedelic or hallucinogenic. One feels calm. This calming effect is particularly noted by an observer as a significant change in facial expression and tone of voice. The limbs become heavy and lethargic and visibly tremble. Hypersalivation occurs, particularly at the back of the mouth, making for a particularly smooth smoke. A slight irritation of urethra and anus is sometimes noted. At higher dosages, dizziness and nausea sets in with very little increase in the high. Closed eye imagery is at best hypnagogic. That is to say, faint, moving outlines can be discerned with closed eyes. If one has a particularly vivid imagination, ghostly outlines of figures can be discerned. The more literal minded just see dim shifting blobs of light and dark. No one who has experienced DMT or high dose mushrooms would ever call them visions. The high comes on and stabilizes after about 5 to 10 minutes or smoking. As mentioned before, it is very difficult to get higher by smoking more. If one stops at this point, the most noticeable thing would be a calm and unapprehensive state. We take particular note of this diminishing of apprehensions since we are always apprehensive before we smoke DMT so its diminution or absence is very noticeable. The passion flower is mentally the foggiest high, but curiously has the strongest “anti-depressant” effect. This may be related to the overall mix of alkaloids in the passion flower.’

‘Within about 20 minutes, we all began to experience some profound
behavioral shifts, all of us acting in a more “primal” manner. We were also quite energized and “up”, with some slight distortion of colors. This very fun state lasted about three hours or so, followed by a very deep sleep in which all involved experienced quite profound dream states.’

Excessive doses of therapeutic commercial products may also have some effect.

They decribe their experiences with pure synthetic harmaline as below:-

“I took a half gram of pure synthetic harmaline after fasting for over a day. The resulting nausea was greatly attenuated after I vomited. At this dose there were intense and annoying visual disturbances, and complete collapse of motor co-ordination. I could barely stagger to the bathroom, and for safety’s sake locomoted by crawling. Tracers and weird visual ripplings disturbed my sight with open eyes. With eyes closed, there was eidetic imagery. It had no symbolic significance, just bothersome disjointed sequences that lacked a relevant theme. They proceeded to transform so slowly (in comparison to the speed of my thought) that they were predictable and boring. Throughout the experience I just lay hoping it would end soon. It did not seem as though I had encountered intrapsychic material which was being expressed through somatic symptoms. Rather, I felt that I was struggling to metabolize a chemical disruption of my physiological functions. Although the session was not enjoyable, I was satisfied at having educated myself about the effect produced by a penalty dose of this compound.”

Rather them than me. The biggest risk of such adventures, other than mental disturbance, is the potential MOA inhibition, but it would only be likely to occur with large amounts of concentrated extracted or synthesised alkaloids as above. MAO (monoamine oxidase) is an enzyme produced in the body which breaks down amines and renders them harmless and ineffective. All MAO inhibitors interfere with the protective enzyme and leave the body vulnerable to these amines. A common substance such as tyramine, which is usually metabolized with little or no pharmacological effect, may become dangerous in the presence of an MAO inhibitor and cause headache, stiff neck, cardiovascular difficulties, and even death. MAO inhibitors may intensify and prolong the effects of other drugs (CNS depressants, narcotic analgesics, anticholinergics, dibenzazepine antidepressants, etc.) by interfering with their metabolism. In the presence of an MAO inhibitor many substances which are ordinarily non-active because of their swift metabolism may become potent psychoactive drugs. The phenomenon may create a new series of mind alterants. However, because of the complex and precarious variables involved, it is risky and foolish for anyone to experiment with these possibilities on the non-professional level.

”The interaction of certain foods and drugs with the MAO inhibition brought on by beta-carbolines can be fatal!! The following substances must not be ingested within 48 hours before and after taking the brew: All amphetamines or related compounds, such as MDA, MDMA, phenylpropanolamine, ephedrine, etc. (add “smart drugs” to this category.) Any foods containing tyramine, or where enzymatic processes have been used: e.g., yoghurt, sour cream, aged cheeses, wines, especially port or Chianti, beer, fermented sausages (pepperoni), soy sauce, etc. Certain other foods, including: shellfish, bananas, liver, avocados, broad beans, chocolate, coffee and others.”

So there you have it. In essence any Passiflora commercial therapeutic preparations are relatively safe but concentrated extracts or substances such as synthetic harmaline can be very dangerous.

Much of the above information from Gracie and Zarkov and also from unidentified authors in Usenet Groups.