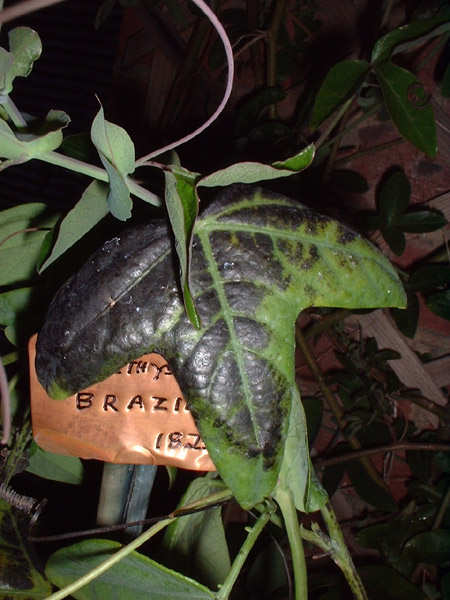 This shows a curious problem on P. amethystina which I have called the ‘Black Disease’. Note that the affected tissue dies but not the plant itself! Also it is not infectious.It happens as a result of tissue necrosis in some Passiflora once the vascular water transport system to that particular part fails. In this particular instance, by its pattern, leaf scorch may have triggered it. Note in the leaf above that the veins are still OK. Dr. John MacDougal comments that ‘It clearly is an internal physiological (abiotic) reaction.’

Black Disease indicates that a particular bit of tissue is dead but does not indicate that the plant itself will necessarily die. If its growing conditions improve the Black Disease will not travel further. It has also been observed on closely related species such as P. loefgrenii ‘Corupa’ and P. loefgrenii ‘Iporanga’. It can also be found on the hybrid offspring of these species such as P. amethystina x P.caerulea, P. ‘Purple Haze’, but the crossing considerably reduces the problem.