Cross pollination. How to create a hybrid. 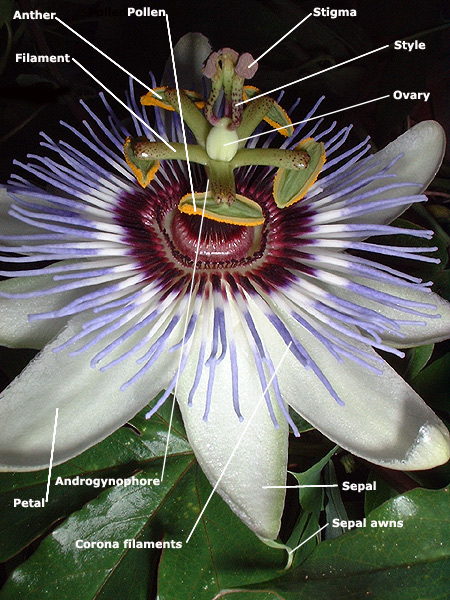 This is when pollen from a flower’s anthers is transferred to either the stigma of the same flower, another flower on the same plant, or another plant which can be of the same or a different species or hybrid. Learn how to do this below. In the wild, pollination is normally within the same species, & this is how plants evolve, usually with the assistance of pollinators such as bees. If the new species variations from the offspring are more vigorous & better adapted to their environment than the parents, over a long period of time they can take over from them. If they become different enough we may categorise them as a separate Passiflora species.

It is rare, but not unknown, to find wild hybrids which are the result of cross-species pollination. Tacsonia will do this more commonly than other Passiflora. In captivity however, when we deliberately transfer pollen, it is usually from a flower of one species or hybrid to a flower of another species or hybrid to create a new hybrid offspring with characteristics of both the parents. Sometimes we can have problems or get unexpected results. Always grow plenty of species plants as hybrids often have little pollen for their pollinators. Some rare bees are at risk because of this.

The technique is simple. The moment the flower opens, on the plant chosen to be female, snip off the pollen covered anthers. After midday (to ensure it is ripe) transfer pollen from the anthers of the plant chosen to be the male onto the stigma of the female. Pollen transfer should be done with a camel hair brush or similar. I usually use either fingers or snip the anthers off and hold them with tweezers when applying the pollen. You can also bud pollinate – that is carefully snip the top off a flower that is due to open the next day or two and apply the pollen. This may in some cases prevent the flower rejecting the alien pollen.

Always label the flower (plastic tag & waterproof ink!) with the details of the cross. Some people then protect the flower from further pollination by bees by protecting the flower with a small muslin bag or similar. Within a few days if fruit has been successfully set you will see it begin to swell. It may take many months to ripen, always wait until the fruit drops from the plant or comes away by hand without effort, then sow the seed & hope! It is a good idea once the fruit is large enough to gently write both parents’ initials on the fruit. Sometimes it is better to dry the seed and sow it the following Spring. Read more

There have been many attempts to store pollen for use later. The technique is simple. Snip the anthers off the fully open flower when the pollen is fully ripe, usually in the afternoon, though some flowers close earlier. Then put the anthers in a sunny window or even with gentle bottom heat to dry them out for 24 hours or more. Then store them in the fridge in little corked glass bottles with silica gel. To use remove from the bottle, breathe on them to increase the moisture content and apply with a camel hair brush. That said I have had minimal success if any with this technique and I’m not sure that even in laboratory conditions anyone has done much better.

Almost all Passiflora flowers have both male and female parts. Passiflora tetrandra is one of only three or four exceptions. The male anthers, which produce pollen, & female stigmas, which receive it. The pollen sends out a tube which travels down from the stigma through the style to the ovary. Sperm within the pollen grain makes its way down the tube and fertilizes eggs within the ovary, then the tube destructs. If this process is successful, fruit will be produced which then mature to contain viable & genetically variable seed. Read more

Hybridising sounds easy & trying to produce new hybrids is fun, but it can take 3 years from setting fruit to the hybrid flowering, if it will flower at all, so patience is required. In in doubt off to the compost heap with it!

There are two main reasons to attempt to produce a new hybrid. One is to produce commercial hybrids with edible fruit, looking for improved crop yield, good fruit size, hardiness & disease resistance, e.g. P. edulis which has many varieties. The other is to produce hybrids that are decorative & often perfumed, e.g. P. ‘Damsel’s Delight’ &  P. ‘Snow Queen’.

P. ‘Incense’ is an example of an unsuccessful commercial crop hybrid with disappointing fruit, which has been successful because of its appearance & perfume. If you have success, & it is very spectacular, free flowering & distinct from other similar crosses, it may be worth your naming it. Few Passiflora hybrids however have any commercial value unless they meet many criteria.

In 30 years of growing I have to date named only about a dozen hybrids, the best of which have been selected to be commercially available. See Riverside® Passiflora.

Find out how to go about naming your new hybrid here.