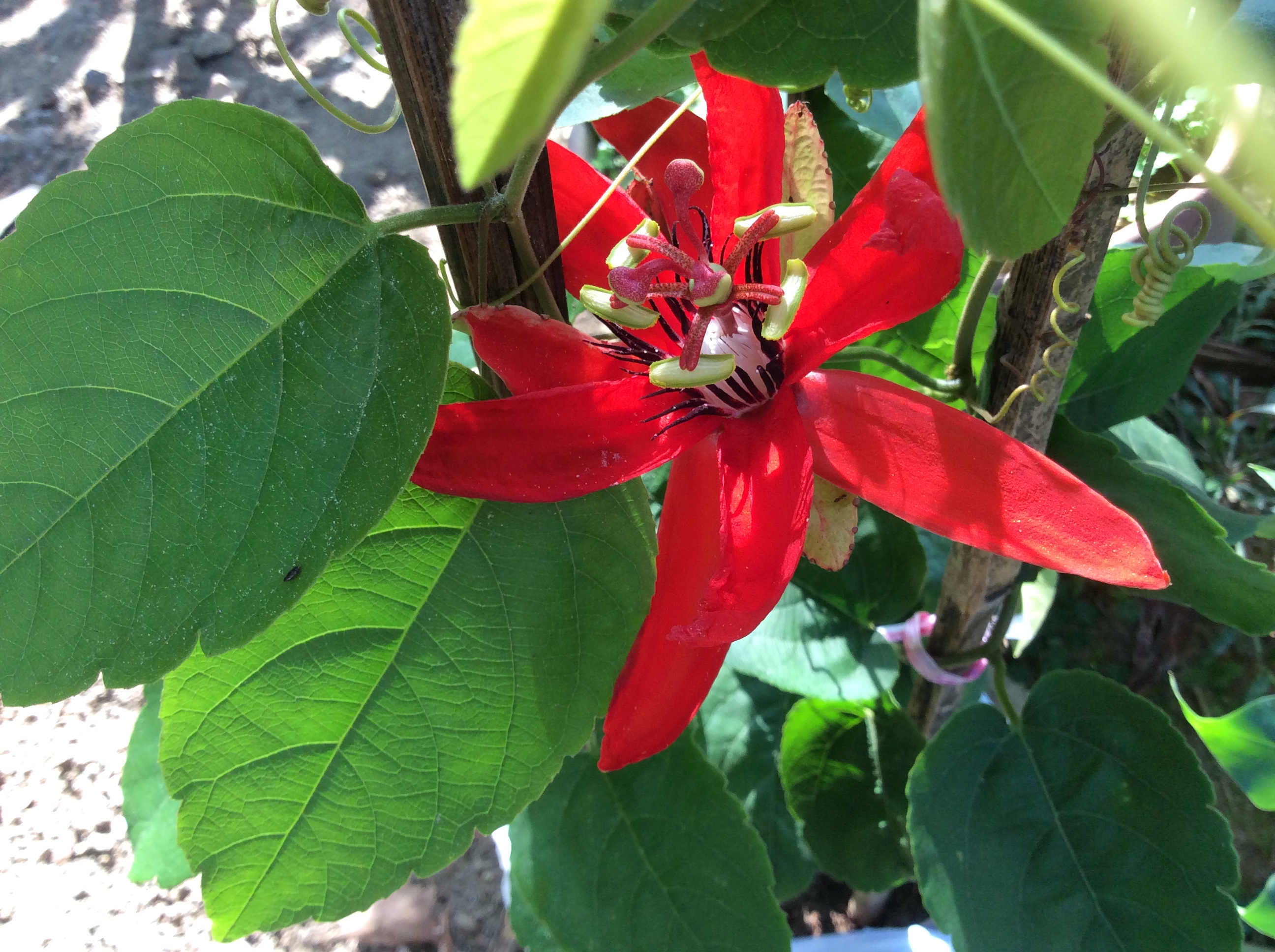 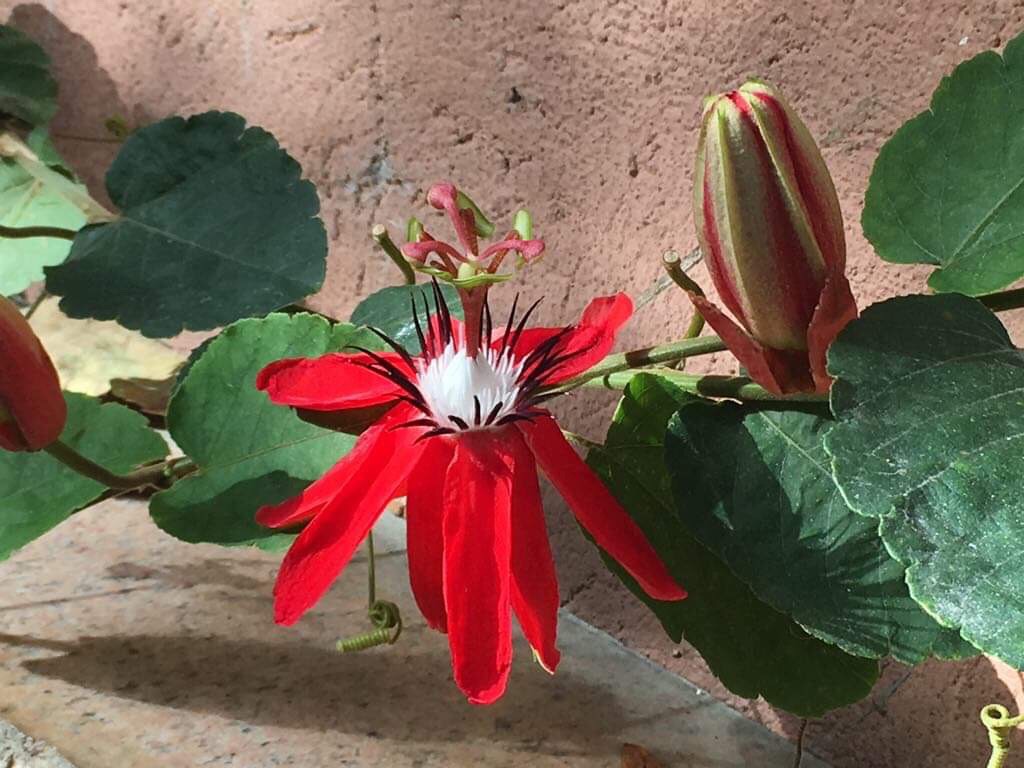 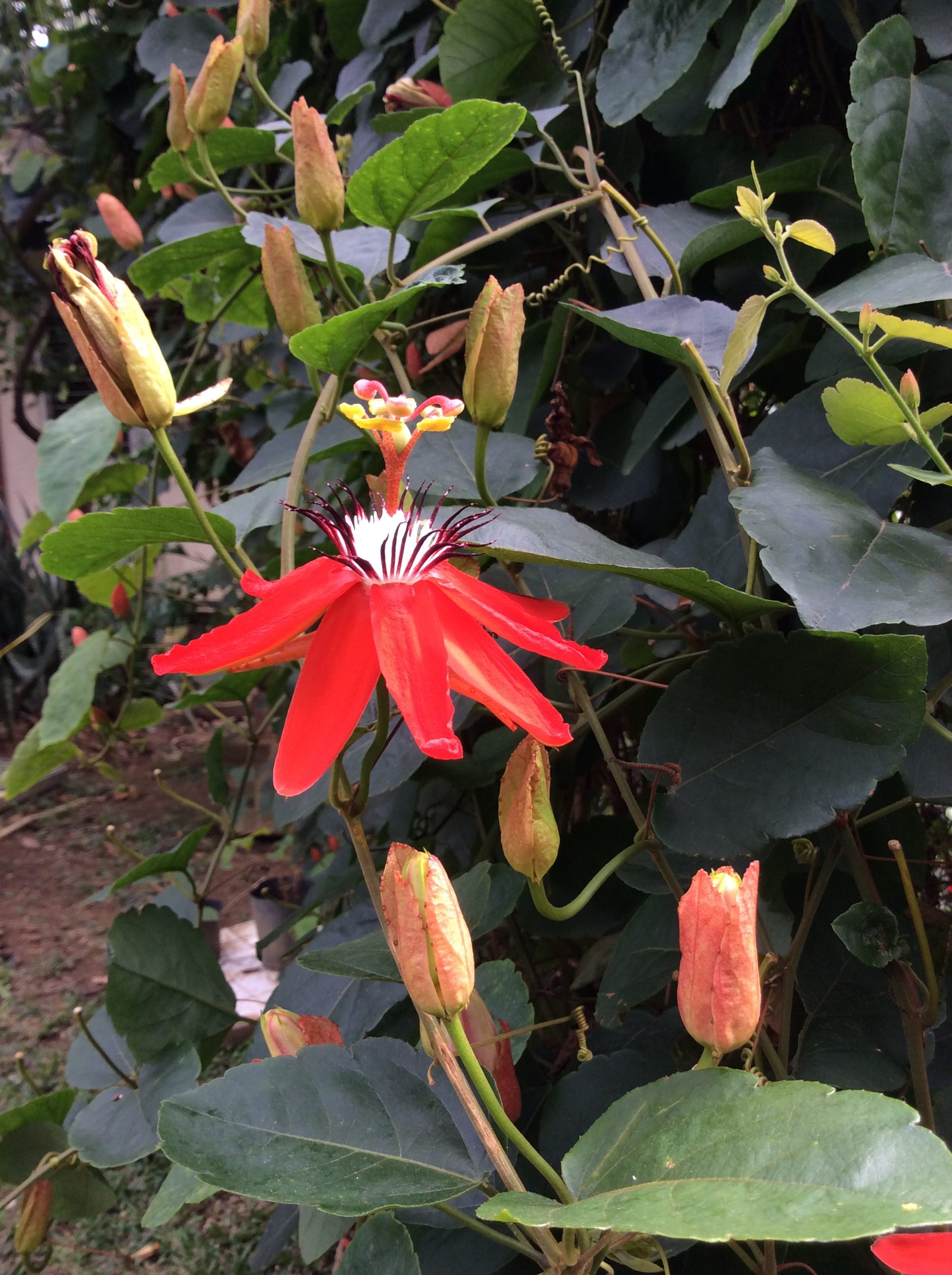 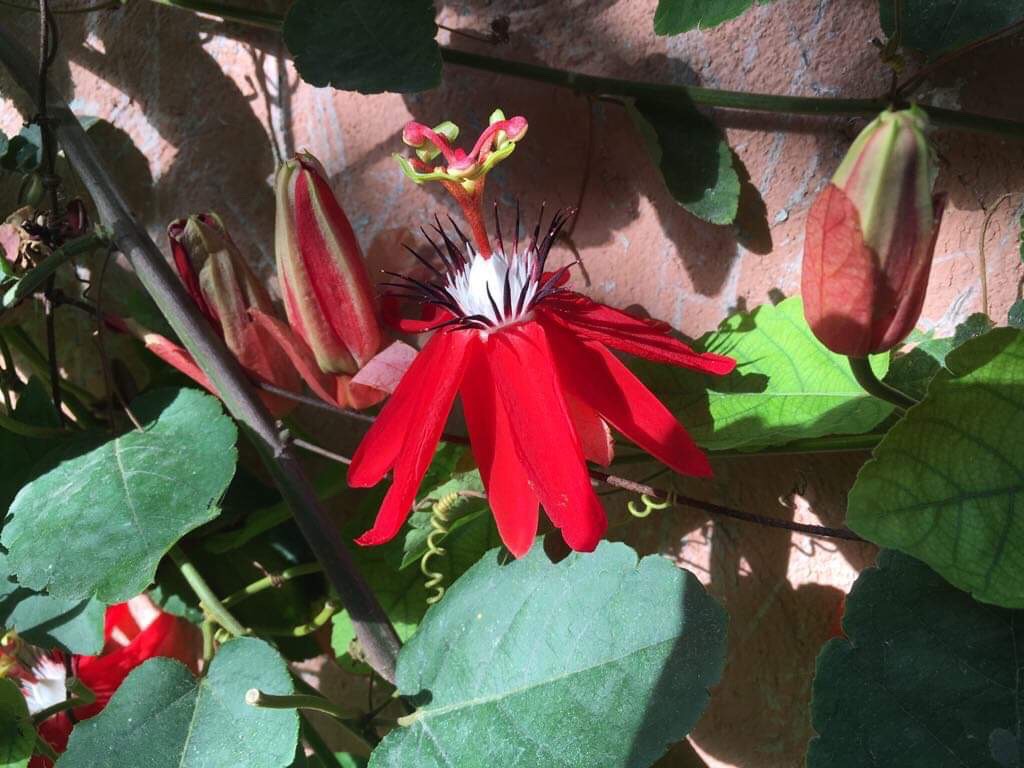 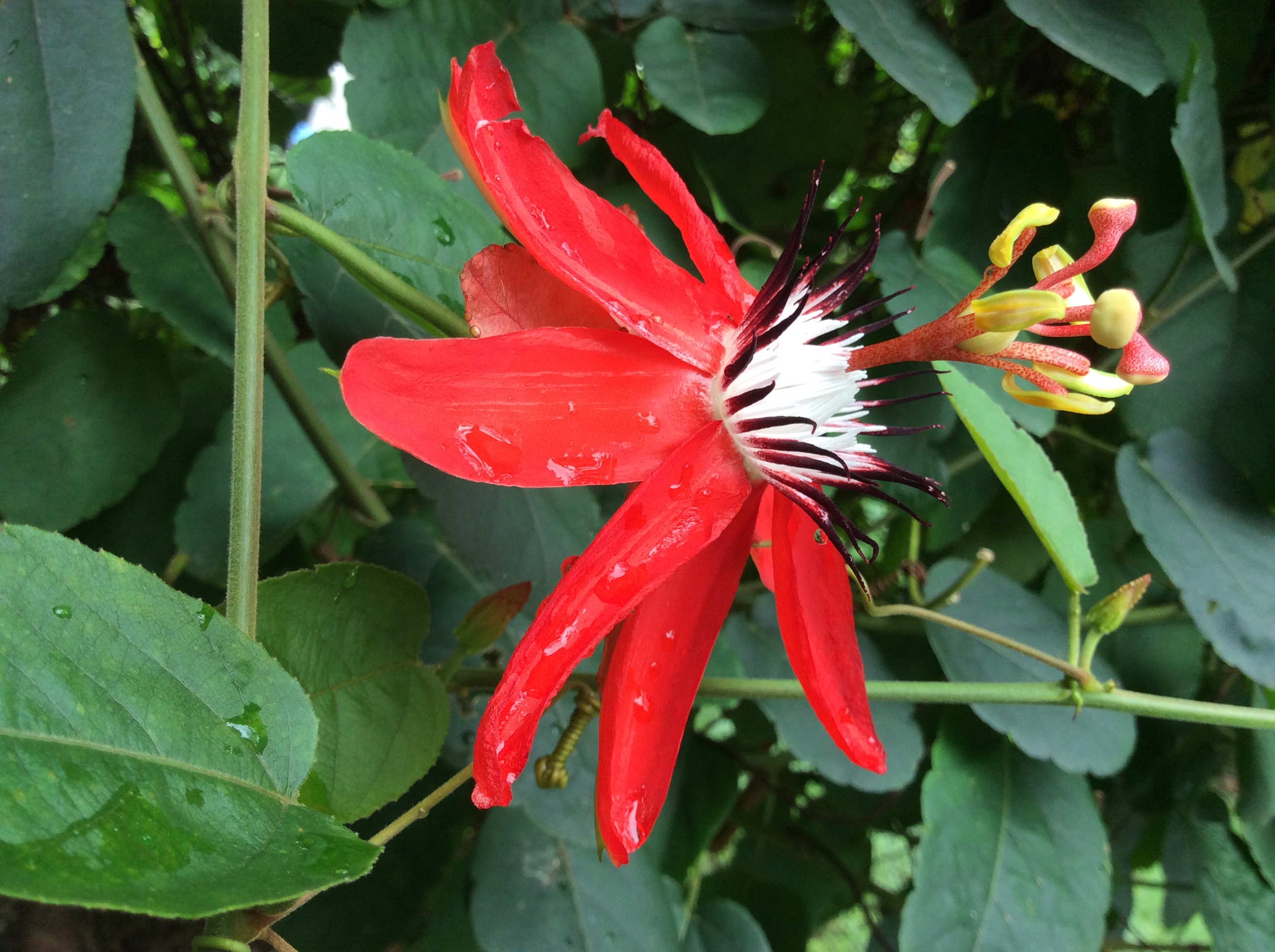 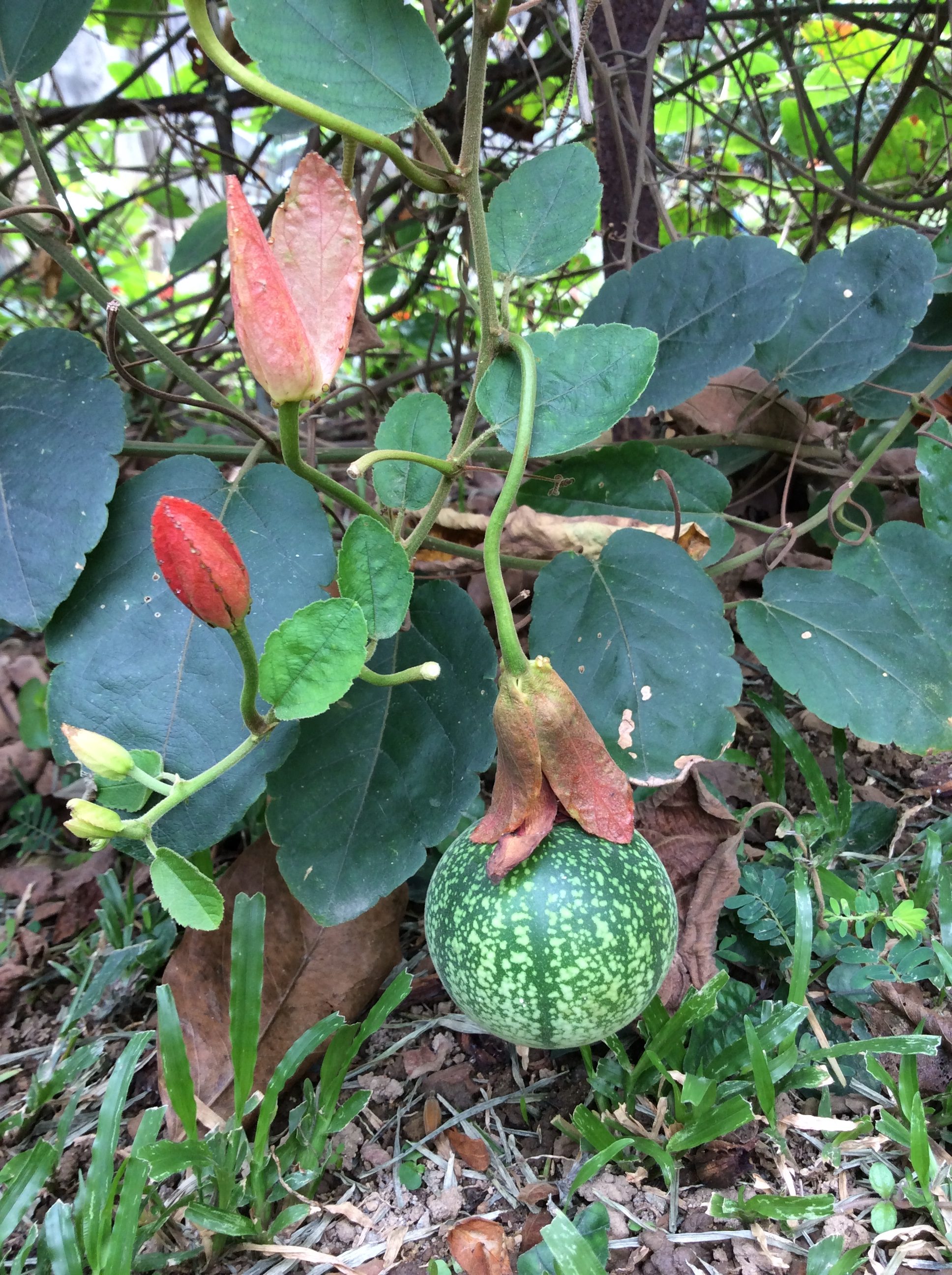 Passiflora miniata is a fabulous red flowered species. It is commonly cultivated and is native to Bolivia, Brazil, Peru & Colombia. It is seen here growing in the Philippines. For many years it was erroneously known worldwide as Passiflora coccinea Aubl but It is however a different species from the true P. coccinea. In 2006 John Vanderplank correctly described and published its new name as P. miniata Vanderplank.

First published: 24 August 2006
Summary. A well-documented Passiflora species from Bolivia, Brazil and Colombia, which has been extensively cultivated under the erroneous name Passiflora coccinea Aubl., is here described as P. miniata Vanderplank; its history, taxonomy, distribution, ecology and cultivation are discussed.
A group of four Passiflora species, Passiflora vitifolia Humb., Bonpl. & Kunth, P. velutina DC., P. fulgens Wallis ex Morren and P. coccinea Aubl., are all closely related with large bright red fl owers, but are very different from one another in other characters such as stipules, bracts, flower orientation, corona filaments and fruit. A fifth species, which is often cultivated under the name Passiflora coccinea, appears to be unnamed, and is described here for the first time, as P. miniata. The epithet miniatus, Latin for scarlet-red, literally ‘painted with red lead’, has been chosen on account of the rich red colour of its flowers, a cause of the confusion between this species and its close relative Passiflora coccinea Aubl. The confusion surrounding this species has been compounded by three past authors. Aublet (1775) described Passiflora coccinea from French Guiana. Masters (1872), in his account of the Passifloraceae in Flora Brasiliensis, added two varieties to P. coccinea, P. coccinea var. minor and P. coccinea var. velutina, formerly P. velutina DC. He also considered P. fulgens to be synonymous with P. coccinea. In his monograph of the American Passifloraceae, E. P. Killip (1938) agreed with Masters, and added Tacsonia pubescens DC. and P. toxicaria Barb. Rodr. as synonyms of P. coccinea as well. Killip stated that the distribution of P. coccinea included Brazil, French Guiana, Surinam, British Guyana, Venezuela, Peru and Bolivia, and although he undoubtedly studied many herbarium specimens of these species for his detailed description of P. coccinea, he seems inadvertently to have described the foliage and fl owers from some specimens, possibly from French Guiana, and fruit and seed from other specimens collected in Bolivia. (This is understandable if you have tried to collect fruit of P. coccinea in the wild in French Guiana as not only are these vines vigorously protected by vicious tree ants, but the fruit are always in the most inaccessible and out….