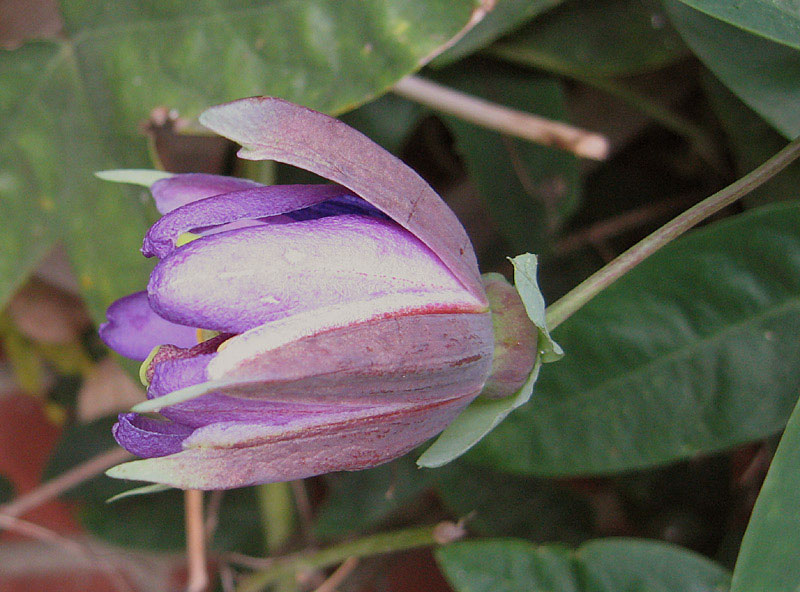 Some of us get very frustrated when our Passiflora plants don’t flower. This is quite complex stuff but is worth trying to follow as it will give you some practical tips as to how to improve your chances of flowering Passiflora.

A gene is a small unit of DNA that controls a particular characteristic e.g. petal shape. A master gene is one that controls the action of other genes rather than producing a particular characteristic itself. Its a bit like a company chairman, absorbing information about the plant’s development & environment perhaps over many months before making a decision. In the example of a master gene below, the FLC gene, which inhibits flowering, somehow juggles the various external factors such as cold & dark with the internal autonomous ones of the plant’s state of maturity & readiness to support flowering to ‘make a decision’….but how?

Information comes from the plants simple (relative to animals) sensory system of plant hormones & growth regulators. The end point of how this information is transmitted to the genes is by a process know as DNA methylisation. This process is common to plants & animals, when a gene has to be temporarily shut down it is covered with methyl molecules. Earlier in the 1990s CSIRO Plant Industry chief Jim Peacock & his colleagues Dick Brock and Jim Davidson proposed that this could be controlling vernalisation. (flowering triggered by exposure to cold.) Put simply, imagine the gene’s DNA as strands of spaghettti covered in loads of little droplets of sauce… which are the tiny methyl molecules. As more of these molecules are removed from the gene’s DNA the more the gene can function or express itself. This is a dynamic process with probably a constant flux of methyl molecules attaching & detaching as different information comes in, as the balance varies so the gene will express to a greater or less degree. There are thought to be about a dozen genes involved in flowering with some of them as they are expressed switching off FLC which in turn allows those genes inhibited by it to initiate flowering.

In 2000 Dr Liz Dennis’ research group at CSIRO Plant Industry in Canberra Australia discovered & patented the flowering master gene for Arabidopsis thaliana, a common weed that is much studied because it matures so quickly in 42 days. Found at Flowering Locus C (FLC) on the plant, they discovered that the default position with the gene fully ‘on’ is for flowering to be off (gene switches can be thought of as like volume controls) & it is believed that the gene may well be universal in all flowering plants. I found the logic of the fine detail of their article hard to follow & contacted Dr Liz Dennis in June 2001 for an update. She advised that ”we think that in fact it is a double barrelled system and that it is a repressor of FLC that is down regulated by methylation so that it becomes active and prevents FLC from acting.”

I’m not sure I’m any the wiser! It makes sense that flowering should be set to off as otherwise plants could struggle to produce flowers before either the plant is mature enough, or at the wrong time of the year.

Of course scientists do not like just to observe, but to modify & control what they observe. If this gene is universal there are implications for all farmers & growers of cereal, fruit, garden & houseplants with regard to control of FLC:-