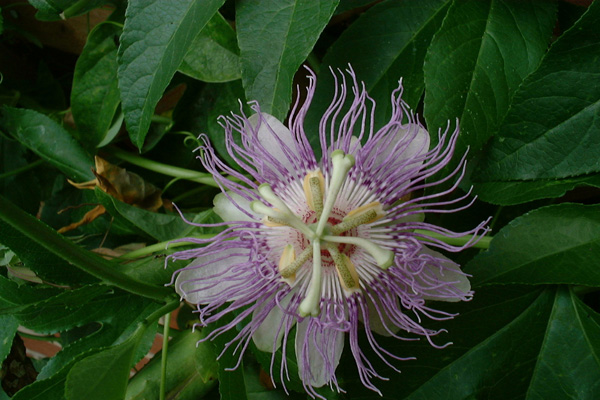 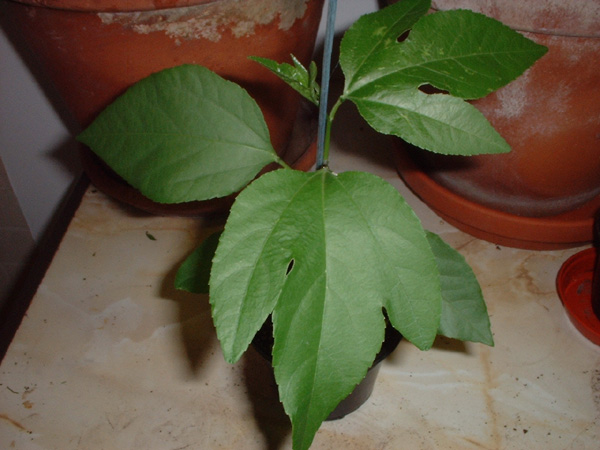 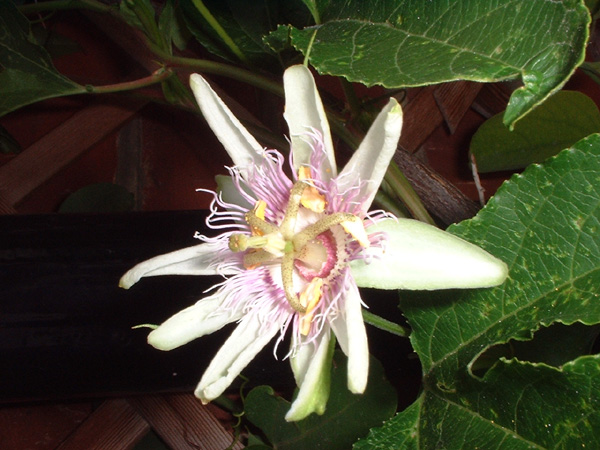 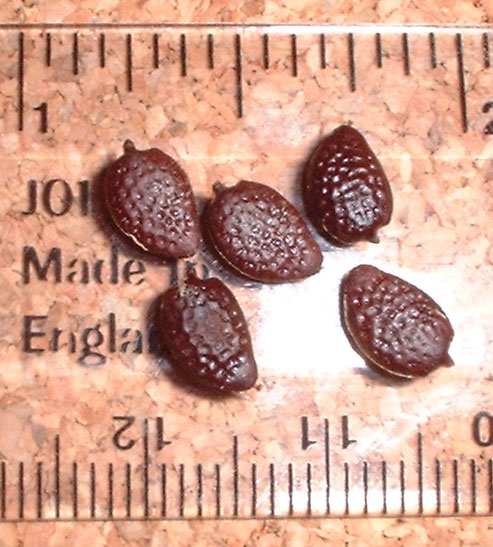 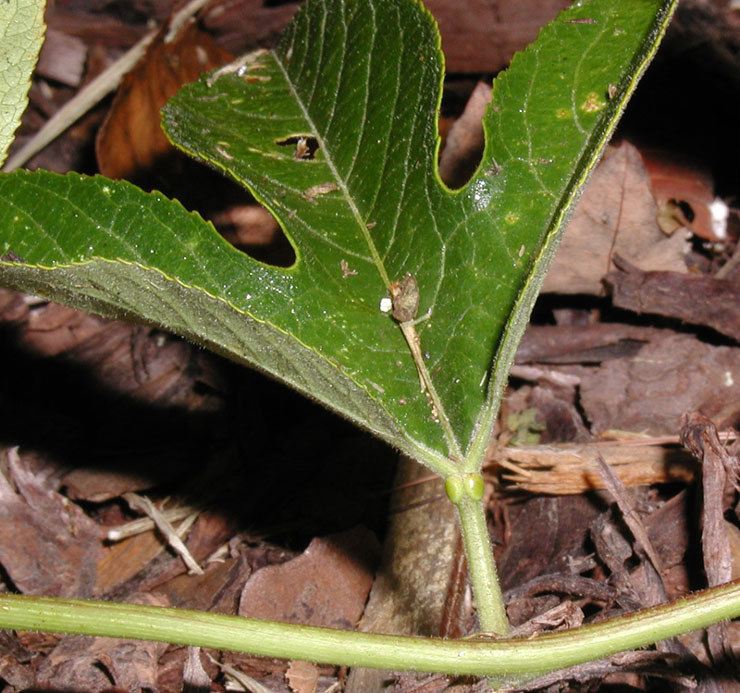 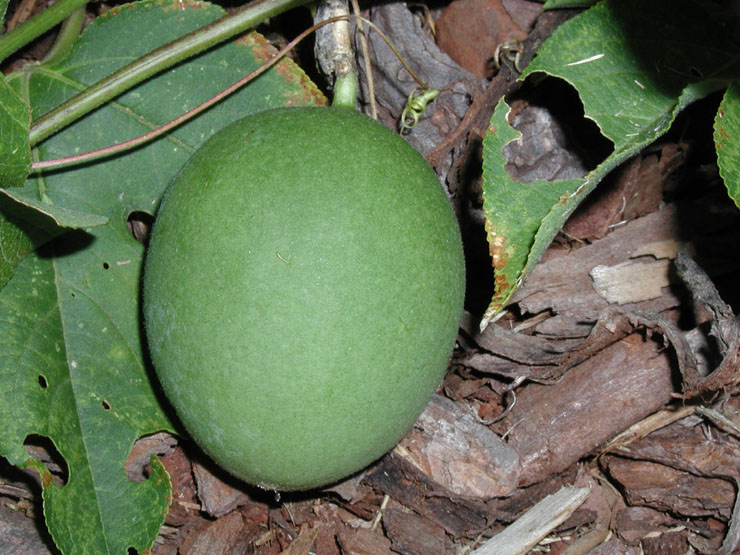 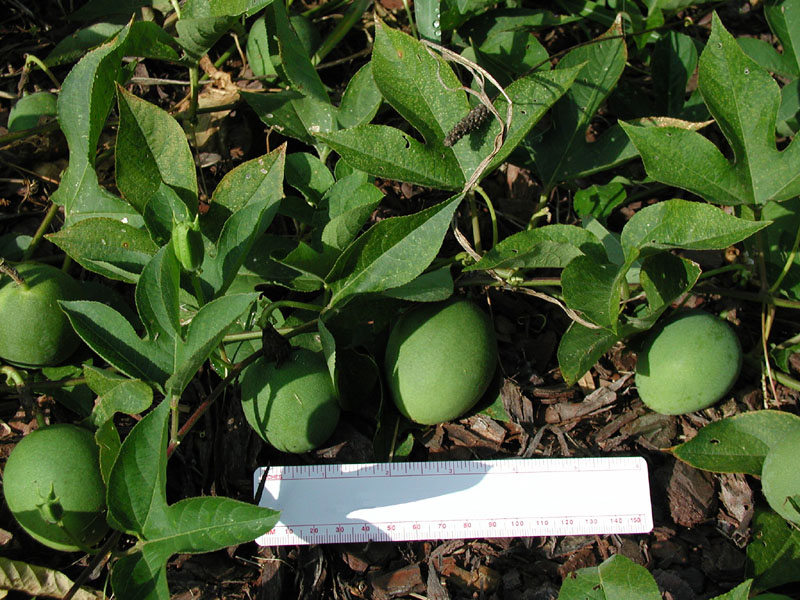 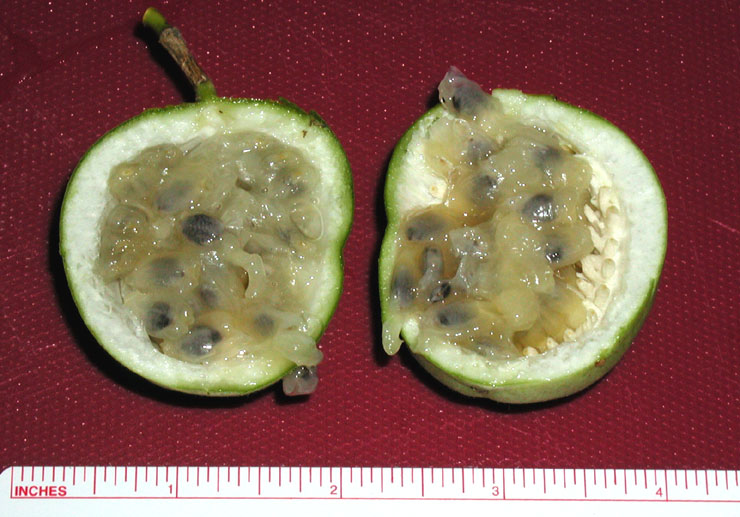 Passiflora incarnata. Many thanks to Hal Love, from Whites Creek Tennessee USA, for his kindness in supplying most of the pictures in this section. P. incarnata is herbaceous & is widespread in the southern United States. It does not do well in the UK climate, being prone to the roots rotting over winter & mildew & virus problems over summer. I have even known it to miss a year and reappear. It will sometimes not come up from the ground till August. I am not quite sure why it fails to thrive here but I have given up growing it. Mark Cooper advises that it does not do well for him either in Costa Mesa, California.

P. incarnata varies from area to area in flower appearance between very dark almost P. ‘Incense’ like flowers & very light. It is known for very variable flowers even on the same plant. It is used to growing in very poor soil & seems to react badly to fertilizer. In Arkansas, Maryland, Tenessee & Texas however it can grow very aggressively, sending up runners everywhere including in the middle of lawns. It is far easier to propagate by these runners rather by cuttings.  Apparently the roots can go up to three feet down in suitable soil. There is also a white form, P. incarnata alba, and a new white tetraploid P. ‘Supernova’ found by Ethan Nielsen. There is an excellent article on Passiflora incarnata by Padric Stephenson in the Passiflora Online Journal Issue 7 page 8.

P. ‘Incense’ always has a pair of petiole glands half way up the petiole and usually has five lobed leaves but occasionally three or four. It is thought that they have crossed in the wild so you can also find intermediates with characteristics of both. Note, the petiole is the bit of stem that connects the leaf to the plant. The petiole glands are little bumps that secrete nectar.

The research below is fascinating, to summarise, it appears to suggest that any part of the plant under attack by herbivores is more likly to produce flowers that act as a pollen donor only, as of course it is a waste of resources to set fruit on a part of a plant unlikely to make it to maturity. Read more

Abstract: We examined the effect of defoliation on gender expression and fruit set in a north-central Florida population of the andromonoecious vine, Passiflora incarnata, during the 1984 flowering season. At three times during the flowering season (May, June, July), the leaves adjacent to flowers at four stages of development were removed, and subsequent sex and fate of each flower were determined. Defoliation affected gender of the flower by significantly decreasing the probability that the styles of the flower would deflex and the flower would thus function only as a pollen donor. Flowers were sensitive to defoliation at any stage before anthesis, though the sensitivity appeared to decrease in the most mature category of flower buds. Fruit set of hermaphroditic flowers remained unaffected by defoliation, but the probability of fruit set and gender expression were significantly influenced by the time of the flowering season. We conclude that the local photosynthate environment determines flower gender in Passiflora, but branch or entire plant photosynthate resources can compensate for local resource fluctuations and play an important role in fruit set and flower bud abortion. The sexual lability of Passiflora incarnata appears to be an adaptation to uncertain resource levels at a fine scale, caused by nearby developing fruits and the possibility of herbivore defoliation.