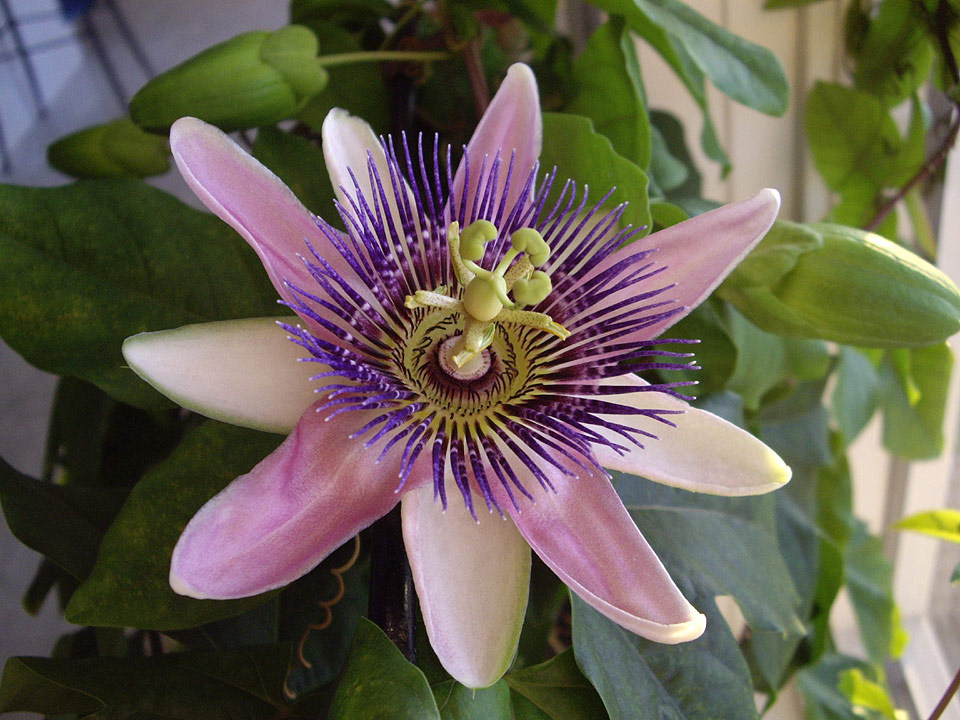 Passiflora x belotii. A stunning hybrid with a beautiful perfume similar to ‘Refreshers’ sweets. Note that there has been considerable debate about whether this format of the name is correct. It is, and an explanation as to why here

Passiflora x belotii often incorrectly spelt as x bellotii, belottii or belotti. It is a hybrid of P. alata x P. caerulea. Named P. alato-caerulea by Dr Lindley in 1824, John Vanderplank’s book lists the following alternative names, P. x belotii, P. ‘Empress Eugenie’ (nice article with great pics), P. ‘Imperatrice Eugenie’, P. ‘Kaiserin Eugenia’, P. munroi & P. x pfortii, some of which are still in use. The latest Passiflora hybrid lists have collapsed them all into ‘P. x belotii‘. Flower variations however include either a dark or light centre, one or a number of white bands on the coronal filaments & petals crumpled to varying degrees. Clearly there are a number of similar but distinct hybrids, probably all of P. alata x P.caerulea parentage. Passiflora x belotii  ‘Perfume Passion’ is a new version of the cross with Plant Variety Rights applied for. It is my view that they have been overcollapsed & could probably be separated out again, but as they are decorative & all thought to be sterile it did not seem to matter too much. That has changed however as Sandra Prais has repeated the cross and produced fertile offspring. 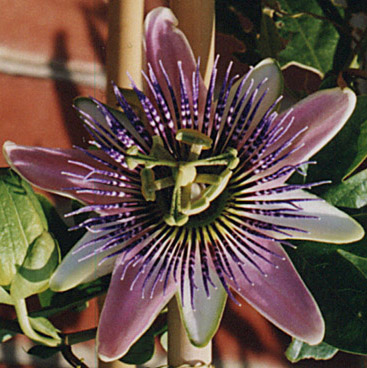 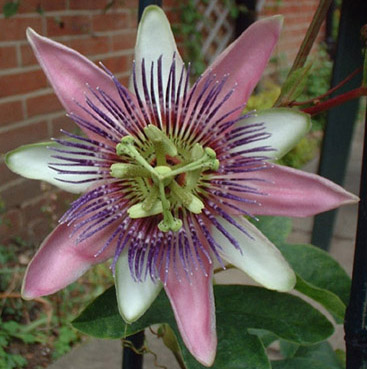 My ‘P. x belotii‘ was supplied by Hill House Nursery identified as P. × caponii ‘John Innes’. This is described in the PSI hybrid list as

P. x caponii is most likely P. quadrangularis x P. caerulea, i.e. P. x allardii. It could also have been P. x decasineana x P. caerulea. The plants sold at Hill House can be traced back to Kew and the original stock, so they are strictly P. xcaponii, but it may be that P. xcaponii is just a synonym for P. x allardii. I know this paragraph makes little sense. DNA analysis is required really to sort it all out. It is further complicated by the suggestion that P. x caponii may be a triploid. Les King and Emil Kugler propose that the cross of P. quadrangularis × P. racemosa never happened. Read more

P.x belotii has also been suggested in the past to be P. edulis x P.quadrangularis or P. × buonapartea, or P. racemosa-caerulea x P. quadrangularis with its origins becoming lost in the 1850s. Thanks to Leslie A. King for this information from Axel Frank and Emil Kuglers’ hybrid checklist.