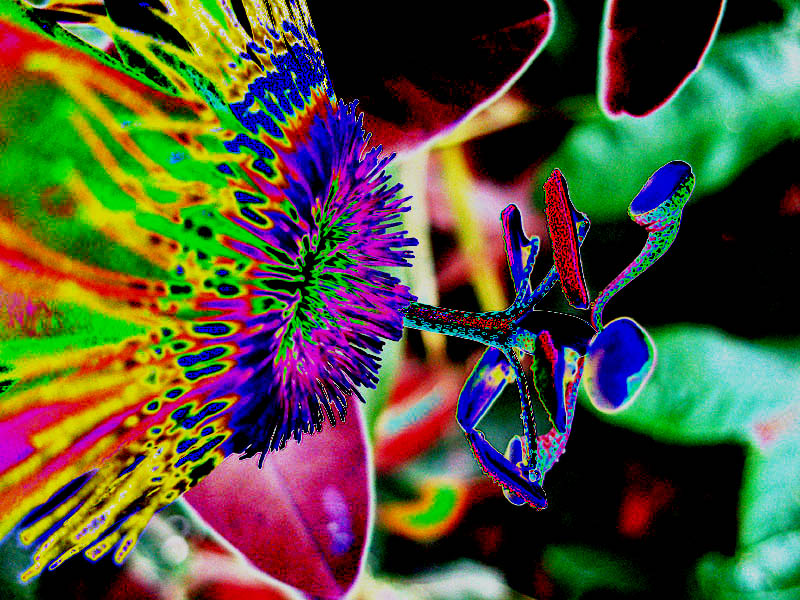 Are Passion flowers and some Passion fruit toxic? Thanks to Dr. Les King (Forensic Scientist) for his helpful comments re this section. First of all don’t be overconcerned about the information here. Many garden plants are potentially poisonous and Passiflora or Passion flowers are far less so than most. If you only ever eat ripe fruit from shops and markets you will be fine. Passiflora incarnata  in particular is even used theraputically. Passiflora nevertheless contain some very interesting and powerful potentially poisonous substances which could become dangerous when concentrated. Both foliage & unripe fruit are so bitter however that even children are unlikely to be tempted by them. I have heard anecdotal evidence though of dogs becoming ill for a day or so after eating the unripe fruit

”Many Passiflora species are cyanogenic (Olafsdottir et al. 1989; Spencer 1988), that is they liberate hydrogen cyanide (HCN) when damaged…Most plants that are cyanogenic contain both a cyanogenic glycoside and the necessary enzyme (a b-glycosidase) that when combined during structural damage to the leaf, as they would be during herbivory, liberate HCN. In most cyanogenic plants, the cyanogenic glycosides are located within the vacuoles of cells while the enzymes are attached to the outside of the cell wall (Gruhnert et al. 1994). Therefore, for Cyanogenesis to occur cells must be lysed (broken) and the intracellular contents, include the vacular contents, must spill into the intercellular spaces. Because cyanide is toxic to so many species, cyanogenesis acts as a defense against many potential predators (Jones 1988; Nahrstedt 1985; Schappert & Shore 1999). However, to some species (including the two butterflies in the population study) that have adapted to use cyanogenic species as host plants, differing levels of cyanogenesis among individual plants may have implications for the use of plants in the population.

The Passifloraceae and allied families (including Flacourtiaceae and Turneraceae) possess an unusual HCN chemistry where the cyanogenic glycosides have a cyclopentenyl structure, that is, they are aromatic compounds with an additional 5-member ring (Tober & Conn 1985). Both a cyclopentenyl cyanogenic glycoside (gynocardin) and its specific B-glycosidase have been isolated from P. incarnatatissue (Spencer & Seigler 1984)…”

Some of these compounds, like gynocardin, are cyanogenic glycosides which when broken down will quickly release poisonous cyanide. Others are psychoactive and some people even prepare Passiflora to try to get a legal Passion flower high.

Don’t try this at home folks. To experience the consequences of herbivory I tried chewing a P. caerulea leaf. At first it is quite sweet, then as the cells are crushed the taste and smell changes, due to the bitterness caused by the very rapid cyanide release – which results in you spitting it out. It left my tongue feeling a bit odd for a while. The bitter taste is to discourage rather than kill bigger predators, so we are unlikely to come to harm, though the plants hope to do more severe damage to caterpillars. Nevertheless assume that all fresh Passiflora foliage is toxic. The foliage of many Passiflora even when undamaged also often has a pungent bitter smell to warn you.

I would recommend only eating ripe fruit from commercial sources like shops and markets. Passion fruit juice is used worldwide in exotic drinks etc. The fruit are also widely available, usually being P.edulis, yellow or purple fruit, or occasionally P. ligularis which has a hard brittle shell. Unripe fruit can also contain poisonous cyanogenic glycosides. P. adenopoda & possibly P. gibertii unripe fruit are of particular concern. There is also a question as to whether P. ‘St. Rule’ is also P. gibertii under another name. Henk Wouters advises however that the P. gibertii grown from seed from Mauro Peixoto in Brazil, in Piet Moerman’s Collection, has bigger flowers, different buds, stronger leaves, etc compared with P. ‘St. Rule’. He also thinks the one now named as P. gibertii is possibly P. pallens.

‘I must come down firmly against fooling around casually with the eating the shells or rinds of passifloras. Many are poisonous. Millions of years of God’s evolution has made the fruit to be delicious, …inside! Maybe when ripe the outside is OK, or if they are bred to be bland, like cultivated P. quadrangularis, but wild species are dangerous to play around with, especially raw. And unripe fruit walls are very very dangerous! Cut it and smell it-you can often detect the cyanide. You may have smelled it when you cut a fruit that still had seeds at the “white stage.” Most species of passiflora produce cyanide in all their parts as a protection against insects and animals eating them. The young, developing ovary and immature fruit often have the highest concentration of all!!! (to protect the baby seeds?). But not all species have been tested.

It is NOT just this species, but many, if not most species that could do this. Just as “peach leaf tea” kills kids in the USA sometimes. Even ripe fruit has a trace, but not enough to hurt you. P. quadrangularis rind is apparently OK, but is often candied, cooked, or blended with other things first.”

***So, the general rule is: Don’t Eat green , Immature, or developing fruits, especially raw! When ripe, the pulp of all species is probably OK.